I used to be an Apple buff having an iPhone 5 and iPod Touch before switching to Samsung Galaxy S6 Edge. The Android mobile and operating system is great. But, admit it, there is one thing I thought was better on iOS was iTunes because it allows you to organize and tag your music really easily.

Luckily, things changed until I found and stick to an awesome Android Music Manager. I would love to share with you. So here is a piece of advice on how you can manage your music on your android without iTunes. Syncios Android Music Manager is probably the closest application to a true iTunes for Android. As a professional desktop app, it makes a great pair with your Android mobile and tablets that gives you control over your playlists, music, and media. The app is free and available for Windows (soon for Mac), and gives you a single app to use to manage the songs you sync to your device, playlists you’ve created, podcasts you’ve downloaded, photos and videos you have on your Android phone, and even the apps you have installed.

Although you are enabled to copy songs between computer and Android via USB cable directly, you would prefer to transfer music using this music App with its sleek and user-friendly interface. All of your songs are listed alphabetically and in good order.

You are able to transfser music from computer to android, from phone to computer selectively or in batches. Simply drag and drop songs, photos, videos between phone and desktop remarkably smooth. 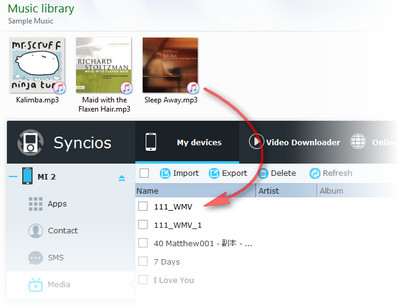 Syncios Android Music Manager presents you with a window allowing you to select which song(s) you want to copy to your phone. It also offers you the option of deleting all songs not on the playlist from your device, omporting new songs and videos, so you can use it exactly like iTunes if you want to.

Once the mobile app is set up to sync with its desktop companion, go My devices>> Media, then check audio files on the checkbox, then click Delete to erase music or tag Export to move song(s) to PC. 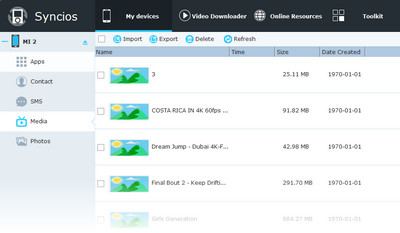 Undoubtedly, you have access to the Android Market for applications, as well as Amazon MP3 store and download music so yeah. What if you are able to download online videos, music, movie to your device for free?

Yes, this is one of the key features of Android Music Manager, by which you can download online sources from more than 100 websites, such as Youtube, Niconico, Vimeo, Facebook, etc. It’s pretty much an iTunes for Android app. If you want to try it out now, get the desktop app below and tell us how do you think!

Video Tutorial: How to transfer music between Android and computer