How to backup Apps on Android phone and tablet?

It is very easy for Android users to backup music, photos and videos via USB cable, backup contacts to Outlook or Google account. However, as for apps, there are some limitations for users to backup apps on Android phone or tablet, transfer apps from phone to phone without rooting.

Want to backup Apps on your Android device? Want to share your apps and mobile game with your friends and family? Just follow this article to backup user App(s) and system App(s) from phone to computer with few steps.

Step by Step Guide to Backup Android Apps to PC

Since it is not able to backup apps to computer via USB cable directly, we are going to turn to a third-party desktop app - Syncios Android Manager. Simply install and run this Android assistant on your computer, and connect your phone to PC using USB cable.

Once connected, the program would detect your device automatically and show device information on the homepage. You are allowed to connect more than one iOS or Android device to it at one time. To backup App(s) to PC, click "My devices" to select App(s). The tap on "Backup" to choose backup path. Click on "Backup".

The program allows to backup both user app and system app, you can click on the upper right corner to browse and transfer system apps, such as Google Play, Bubbles, calendar, etc. Once click on "Backup" button, you are able to set your backup path in the pop-out windows. For your convenience, it also enables you to drag and drop Android apps to computer directly, or install apps on device. 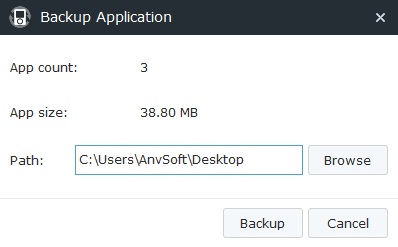 That's it! It's very easy to backup Android Apps, isn't it? Let's download Syncios Manager and check it out. Do let us know about what you think about this page and the software mentioned here. Give us a shout, we would love to hear back from you.