Music is a huge part of a lot of people's lives. The rise of Apple's iTunes has allowed anyone to carry thousands upon thousands of songs right in a pocket. There haven't been many challengers that stood a chance, until Spotify arrived in the U.S. a few years ago and the up coming Google Play Music.

All the big music streaming services now have family plans that allow you to share your subscription with others to save yourself a little dough, but they each vary a bit in how they work. If you are still are on the fence about Apple Music, Spotify and Google Play Music, or considering to make a switch, here's what you should consider when choosing between iTunes, Google Music and Spotify. Google Music   After the 30-day trial period, users can pay the $9.99 monthly fee for access to "millions of songs" (just like Spotify), create a personalized radio from any song or artist and receive "smart" recommendations based on their personal tastes. For family users, Google have launched their $14.99/month plan, which allows you and up to five family members get access to Google Play Music and YouTube Red.

Apple Music   iTunes is free to use, but if you want to listen to a full song you have to buy it. It also offers $14.99 per month for you and up to five people can share an Apple Music plan, it cost the same as Google Music. However, the plan works through the Family Sharing service, so you’ll also be sharing purchases in iTunes, iBooks, and the App Store. Hence, if you are an Apple buff and your family member also equipped with iPhone, iPad or iPod, Apple music could be your first consideration.

Spotify   Spotify offers a completely free option, as long as you don't mind having some of the worst and most grating advertisements popping up between every few tracks. It's $4.99 per month for desktop-only access and removing those adverts, $9.99 per month to use the desktop app and mobile app for your iOS device, Android, or Windows phone.

For $14.99/month, you get two Premium accounts, and you can expand that to up to five people total for an additional $5/month per account. That’s $29.99/month for five people, the price is a bit higher than iTunes and Google Music. Google Music   Currently, Google Music outputs at a maximum of 320kbps. This is quite good for the earbud crowd, but audiophiles who shell out thousands on their home stereo setups aren't getting their money's worth.

Apple Music   iTunes songs are available in a format called AAC, which is better than MP3 in terms of quality. Files can also be downloaded in the MP4 format too. iTunes AAC files are encoded at 256kbps, this is good quality although it is not as good as Google Music.

Spotify   Spotify takes music quality to the “extreme” on iPhone. Spotify originally offered low quality (96 kbps) and high quality (160 kbps) settings for streaming and syncing on its mobile apps, but an update over the weekend has added a new “extreme” quality setting for the iPhone. Spotify has already offered 320 kbps streaming on its desktop apps for premium subscribers. Google Music   Although we are unable to give our an certain number how much songs Google Music offering now. Google representatives claimed it has "millions" of tracks already available on Google Music. It's been reported that Google has negotiated access to music from Sony, Universal and Warner. Also, on February 25, 2015, Google expanded the capacity of each user's music locker from 20,000 songs to 50,000 songs.

Spotify   Spotify is also well established in this area, offering over 20 million tracks. Users don't own songs, but can stream them as many times as they want. Premium users that pay $9.99 per month can download songs to smartphones, tablets, and desktop.

Which one is right for you?

They’re all pretty similar on your wallet, but have a few quirks worth considering before you buy in.

Google has done a lot right with this service. The interface is lucid. And playback is smooth. Slacker, Spotify, and Rdio offer free, ad-supported options and support more devices. Of all the services, Apple Music easily comes off as the most family-centric of the bunch, because it hooks into your entire iTunes account. If you prefer physically owning your files then iTunes may be for you, but if you want access to a ton of songs at any time then maybe Spotify is worth a shot. And streaming fans on both iOS and Android platforms will best be served by Spotify, given Google Play Music All Access's limitations in the custom radio station department.

However,if you’re all already using one service, that’s likely the best approach, but if not, you’ll need to pick which one suits you the best. 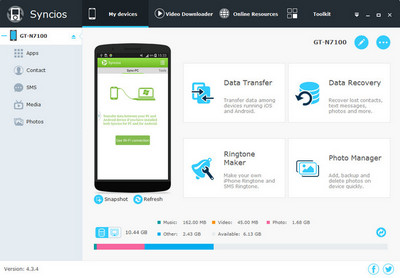